The Economist, of all publications, draws attention to the need for better data around biodiversity conservation in a recent short article, “Extinct and unmourned.”

In June the Zoological Society of London launched an online version of Scott’s books [“Red Lists” of endangered species]. It unpicks the existing global lists held in Morges and examines them at the national level. It should thus be possible to identify which species are at risk of extinction within any given country’s borders. The database contains details of more than 50,000 species in 40 countries and regions, such as the Baltic Sea.

That may sound impressive, but it is not. It demonstrates that whole swathes of the world have been left unexamined … The list’s sparsity shows that in the parts of the world where biodiversity is greatest and conservation planning is most important, conservationists lack the information with which to prioritise their efforts.

My hope is that projects like EOL will seek to provide not only a baseline of information about individual species, but also a platform where aggregate information like this can be more easily collected, presented, and acted upon.

Readers of my last several posts may have noticed a strange obsession with wildlife and communications technology. I’m interested in how information technology — especially imagery and mapping tools — can and are being used in service of biology and conservation. I keep harping on cameras and charismatic megafauna, but truthfully that is only one facet of a larger trend of what I would call “ICT4C” – information and communication technology for conservation.

This time, the story that caught my eye was a man in Pennsylvania who built a system for tracking a radio-collared deer in near-real-time using a bunch of free online tools. The radio collar sends GPS coordinates by SMS every five minutes to an email account (unclear if this is through the radio collar itself or jerry-rigged GPS & mobile), where the information is automatically uploaded to a blog linked to a Google spreadsheet and viewable via dynamic KML file in Google Earth.

I speculated about the likelihood of such real-time tracking technology for wildlife almost a year ago, but didn’t think we would see something similar so soon – it shows how versatile the tools are and how far the costs have dropped. I could easily imagine a company selling this capability to pet owners, ranchers, or wildlife preserve managers. In fact, it’s somewhat surprising to me that there is not a military version of this kind of real-time location tracking of items/individuals that has been spun off and packaged for civilian use. Looks like the tinkerers are mapping the territory.

Click the deer diagram for discussion and detailed technical instructions of how the system was created.

[via Evgeny Morozov via Lunch over IP]

Love this idea: Wildlife film-making outsourced to Indian…elephants? Nature documentary producer/director John Downer trained elephants in the jungles of Madhya Pradesh, India, to carry HD cameras while following tigers through the jungle. Looks like some pretty fascinating footage. The film, entitled Tiger – Spy in the Jungle, will be shown on BBC on March 30.

The camera setup looks high-budget and somewhat unwieldy, relying on trained elephants, active remote camera manipulation, and retrieval of the cameras — it’s currently suitable only for a BBC-type wildlife documentary project. However, it is worth remembering that the technology involved is getting better and better — cameras are shrinking, GPS units are becoming more accurate and powerful, and both are getting cheaper. While this indicates a bright future for nature documentaries, there will surely be conservation applications as well. 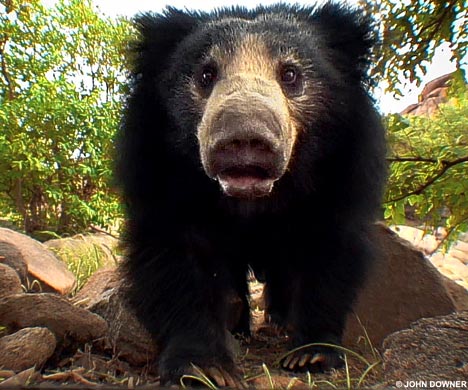 This kind of video footage (uh, the kind shot by elephants) is essentially anecdotal, vs. fixed cameras used by researchers to record activity in a particular location. However, this “embedded” roving footage can provide confirmed sightings of species for which there may otherwise be scant evidence — see stills from the Downer footage interspersed here for species variety and image quality.

It’s only a matter of time before the technology curves enable a) simultaneous video, wireless transmittal, and GPS triangulation, b) longer battery life, and c) smaller unit size to be mounted on smaller animals. As there is not a huge market for wildlife research and film-making, most likely we’ll see development come from other fields and sources first – to be applied later to wildlife science and conservation.

One new angle on tackling these technology challenges comes from Chris Anderson of Wired Magazine, who has launched a project called DIY Drones to encourage the development of amateur unmanned aerial vehicles. Many of these UAVs have the same technology requirements as wildlife GPS and video: light weight, autonomous operation, long battery life, and reliable remote camera/video transmittal. Between the big-budget film-makers, individual scientific researchers, forward-thinking conservation organizations, and hobbyist communities, we should see some interesting developments in this particular niche of the ICT for conservation (ICT4C) space.

Either we do know all the varieties of beings which people our planet, or we do not. If we do not know them all -— if Nature has still secrets in the deeps for us, nothing is more conformable to reason than to admit the existence of fishes, or cetaceans of other kinds, or even of new species … which an accident of some sort has brought at long intervals to the upper level of the ocean.

Kevin Kelly outlines the history of the All-Species Project and the Encyclopedia of Life. Like Kevin, I see the “all-ist” nature of the project as crucial; the semantic shift from “catalog as many species as possible” to “catalog all life on earth” tips the endeavor from the simply monumental into the sublime.

Wolverine outside of Truckee, California, 2008

The above photo has been making waves in the wildlife science and conservation communities, as it is the first confirmed sighting of a wolverine in the Sierra Nevada since 1922. Oregon State grad researcher Katie Moriarty set up the motion-sensor camera to track martens, another elusive and weasel-like species, but wound up capturing the first-ever photo of a wild wolverine in California.

Drawing of Wolverine by C.G. Pritchard (Hall and Keson, 1959)

No documented sightings since 1922? What kind of gentle, solitude-loving creature is this, you ask? Noted naturalist and pioneer of the Boy Scout movement Ernest Thompson Seton, writing from the mid-1920s, is here to set you straight with a sensationalistic if not outright Lovecraftian description:

Picture a weasel — and most of us can do that, for we have met that little demon of destruction, that small atom of insensate courage, that symbol of slaughter, sleeplessness, and tireless, incredible activity — picture that scrap of demoniac fury, multiply that mite some fifty times, and you have the likeness of a Wolverine.

I love this story of a guy in Germany who mounted a cheap digital camera with a timer on his cat’s collar and has posted pictures of his cat’s adventures throughout the day.

I hope this “street use” of off-the-shelf technology for novel purposes is getting some attention in the field biology world. There are early signs of this with the multidisciplinary TOPP project (Tagging of Pacific Pelagics), which is mounting sensors and GPS tags on fish, turtles, and other ocean-going creatures. And scientists have been putting GPS collars on animals for several years now. But some very interesting options would open up once you can satellite upload GPS info and get real-time imagery (eventually video + night vision) from a small package.

I can’t wait for the megafauna versions of this idea — mountain lions, wolves, and grizzly bears roaming around while I plot their progress on Google Earth and watch their FPS-style livecams like Justin.tv! There’s definitely a business model in here somewhere — maybe pitch it as a unique conservation and safety measure for an endangered species.

Put a livecam on each of California’s 7000 mountain lions! They’re supposed to be protected from hunting, but people worry just as much about being protected from the lions — this would allow the public to keep an eye on every single animal. You could “adopt” them, get Facebook feed-style updates when they’re at rest or on the move, and create a puma version of Youtube for the best bits of footage. Seriously, imagine the thrill of tuning in to watch a mountain lion stalking its prey in real time. Unless you’re at a remote campsite in the woods watching on your laptop via satellite: “Hey, I recognize that tent…”

I’m thinking joint venture btw Google and Encyclopedia of Life. Sell ads on collar-mounted LCD screens for those lucky (or unlucky) enough to have a close viewing. Cost per impression is high, but it’ll be one hell of an impression…OK, that was terrible.

Back to reality, it really is an exciting time for information science and biology. And I hope EOL makes a difference in organizing some funding and attention around high-tech-fueled wildlife conservation. That German cat is just the beginning of all this.