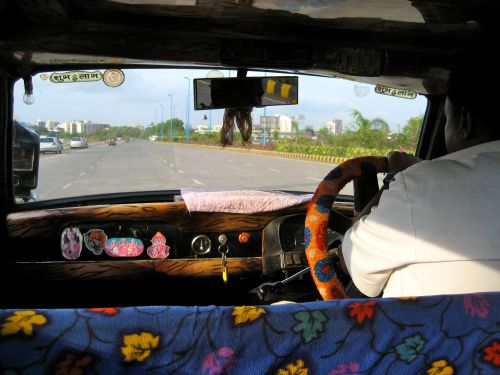 When I lived in Mumbai, it took me months to figure out how to navigate the city. Rickshaws, trains, and taxis were easy enough — it was how to communicate where I wanted to go that was the problem.

People didn’t pay attention to addresses – they knew building names. They didn’t say “the intersection of X & Y streets” – they knew the name of the chowk or square at that location. Bafflingly, people didn’t even seem to know street names – as I came to learn, the official names on the map were often recent impositions and virtually unused.

I learned to navigate by landmark: VT station, Shivaji Park, BKC, Shoppers Stop, Haji Ali. Choose a ballpark destination, then zero in from there with turn-by-turn directions based on shops, statues, parks, and buildings – not street names!

So you can imagine how useless online maps were. Although Google Maps technically covered Mumbai (which I found amazing enough), actually using it was out of the question…until now! The Google Maps team in India has been busy trying to solve this problem: “Go thataway: Google Maps India learns to navigate like a local.”

Have you ever been lost? Perhaps you missed a turn because a street sign was poorly labeled, hard to see in the dark, or just not where it should have been? These are problems we’ve all faced, but they’re especially complicated in India, where street names are not commonly known and the typical wayfinding strategy is to ask someone on the street.
…
To solve this problem, this week we launched an improvement to Google Maps India that describes routes in terms of easy-to-follow landmarks and businesses that are visible along the way. 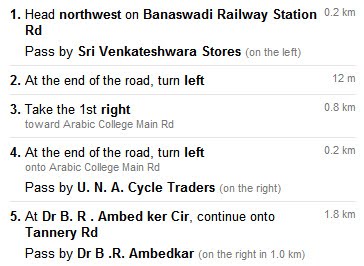 I can’t tell you how useful this would have been to me when I first moved to India! Check out more details on the Google blog.

Fittingly, the same week that TimeOut Mumbai covers the rise of hip hop in Bombay, Kanye West discovers one of Bombay’s newest clubs. Let me be the first to say: Kanye at MMRDA in six months.

New project! This is a community resource for all expats in Bombay — a wiki to gather the best information and recommendations from the members of the Bombay Expats Yahoo Group.

Urban Typhoon is a participatory urban planning workshop on the future of the Koliwada region of Dharavi, Mumbai’s staggeringly large and impossibly dense million-resident slum.

The objective is to produce creative alternatives for the future of a neighborhood threatened by a redevelopment plan of the government as well as a multimedia testimony to the unique spirit of Koliwada. The workshop itself is a joyous and participatory takeover of the neighbourhood. It combines the city’s historic spirit of activism with the celebratory, independent and culturally dynamic traditions that the Kolis of Mumbai have always demonstrated. The plan builds on these impulses in the best traditions of a festive exchange with visitors, guests, strangers and locals of all shades and hues.

While I have some issues with the ideology of the conference organizers, who I feel are overly quick to characterize an incredibly complex issue as a struggle between an oppressed indigenous minority and a cold and corporate-friendly bureaucracy, I salute the effort. The workshop looks like it will bring a vibrant mix of international urban planning perspectives, technological savvy, and an eye for design to one of Mumbai’s thorniest challenges – the future of its nearly ten million slum dwellers. I hope there is some useful output for the residents of Koliwada and the rest of Dharavi.

Interested parties had better act quickly – it appears the week-long workshop (March 16-23) is only accepting 50 entrants (Why so small??). Interested partiers, however, now have an excellent option for the night of Holi, Saturday the 22nd. Mad Decent’s Paul Devro is flying out to spin a wicked set at Blue Frog to cap off the Urban Typhoon workshop, with 100 free tickets going to kids from Dharavi. While I probably can’t afford a week off to attend the workshop, I am definitely going to hit up that show!