The NYT ran a quick “novelties” story on smartphone applications for identifying species of trees by matching cameraphone images of leaves to a database of leaf shapes — Foliage Field Guides for Cellphones. I hope the EOL project is taking notes. Lightweight iPhone-type apps may be the quickest development path towards some exciting new citizen science initiatives.

The promise of automated species identification has been a taxonomic dream for some time. Species identification mobile applications could be a platform for more widespread and persistent biodiversity surveys, e.g., bringing more users to collaborative birding surveys now coordinated online. Given enough uptake and use of such applications, one could imagine an ambient level of biodiversity awareness emerging from this data, a Wikipedia-like record of species sightings. Even a simple map showing the geographic range of sightings of a particular species over time would be hugely interesting.

Science and science fiction has been awaiting the device that would enable this type of information since before Captain Kirk first held a tricorder. Ecologist Dan Janzen articulated the vision of a handheld DNA analyzer just a few years ago:

Imagine a world where every child’s backpack, every farmer’s pocket, every doctor’s office and every biologist’s belt has a gadget the size of a cell-phone. A free gadget. Pop off a leg, pluck a tuft of hair, pinch a piece of leaf, swat a mosquito, and stick it in on a tuft of toilet tissue. One minute later the screen says Periplaneta americana, Canis familiaris, Quercus virginiana, or West Nile virus in Culex pipiens. 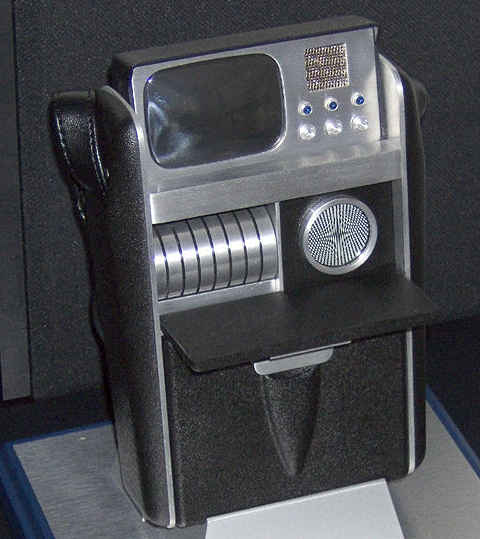 However, we may not have to wait for science to catch up with fiction. I would wager that image-based species identification — next-generation versions of the iPhone app covered by the New York Times — will be enough to correctly identify 90% of the species images that are thrown at them. Most of us would use these in our back yards and beyond, not in the Amazonian rainforest. Facial-recognition algorithms are getting increasingly sophisticated, and there will be no shortage of amateur taxonomists to help systems learn when they mis-identify recognizable species. Given a march towards better cameras and faster mobile data networks, it’s not unreasonable to assume that one could do real-time matching on an uploaded image to narrow the range down to a given species by querying a number of EOL-type taxonomic databases. It’s ultimately a tractable software problem, not an incredibly difficult hardware problem.

I’ve been waiting for my jetpack since we entered the 21st century, and will probably have to wait a lot longer. But a handheld species identification device — sounds like I could be hiking with a beta version on my iPhone pretty soon!

The EO Wilson-founded Encyclopedia of Life is sponsoring a conference on biodiversity informatics — the application of DNA barcoding, IT, and other forms of technology to the issues of biodiversity and taxonomy. E-Biosphere 09 brings together all of the major players involved in barcoding — this will be a great event for understanding the state of the science if nothing else.

Happily, the organizers have created fora for online engagement with the conference — self-organized groups are being asked to produce papers that may end up in the conference proceedings on such topics as:

This is a great start, but one thing that immediately struck me as missing was the role of business. If EOL and its peers envision developing and sharing taxonomic information on every species in the world, they need to start thinking now about commercial models that will support and facilitate this development. What will be the role of the DNA-taxonomy-driven Red Hats?

Either we do know all the varieties of beings which people our planet, or we do not. If we do not know them all -— if Nature has still secrets in the deeps for us, nothing is more conformable to reason than to admit the existence of fishes, or cetaceans of other kinds, or even of new species … which an accident of some sort has brought at long intervals to the upper level of the ocean.

Kevin Kelly outlines the history of the All-Species Project and the Encyclopedia of Life. Like Kevin, I see the “all-ist” nature of the project as crucial; the semantic shift from “catalog as many species as possible” to “catalog all life on earth” tips the endeavor from the simply monumental into the sublime.