Two initiatives from the US Government that look extremely promising:

To build for the future, the Federal Government needs a Digital Strategy that embraces the opportunity to innovate more with less, and enables entrepreneurs to better leverage government data to improve the quality of services to the American people.

These imperatives are not new, but many of the solutions are. We can use modern tools and technologies to seize the digital opportunity and fundamentally change how the Federal Government serves both its internal and external customers – building a 21st century platform to better serve the American People.

The Presidential Innovation Fellows will pair top innovators from the private sector, non-profits, or academia with federal government employees to collaborate on game-changing solutions that aim to deliver significant business results in just six months. Each team of innovators will work together in-person in Washington, DC on focused sprints while being supported by a broader community of interested citizens throughout the country. What makes this initiative unique is its focus on unleashing the ingenuity and know-how of Americans from all sectors.

Seth Godin argued in a recent blog post that publishers need to revisit their assumptions about what “books” are…and by extension what their jobs entail. This is an important point, because it actually shows one potential way forward for an industry that is struggling to create value as its traditional business environment changes underfoot.

Book publishing, like the newspaper business, and the music business before it, is threatened by outmoded business models, new competitors, digital distribution, and the rise of substitutes for consumers. Barriers to creating and distributing a book have fallen so far that, as Clay Shirky says about publishing:

Publishing is not evolving. Publishing is going away. Because the word “publishing” means a cadre of professionals who are taking on the incredible difficulty and complexity and expense of making something public. That’s not a job anymore. That’s a button. There’s a button that says “publish,” and when you press it, it’s done.

So what does a savvy publisher do? Godin argues that publishers should redirect the curatorial, editorial, and marketing skills they have towards other projects that may not take the form of a traditional print book. He uses the short film “Caine’s Arcade” as an example.

It’s worth noting that more people have spent ten minutes watching this film in the last week than have read all but a handful of books over the same period of time. And even more profoundly, that this short film has raised almost $200,000 for the star’s college fund without really trying.

This is an important skill in a world where video is just as important as text. The creators of “The New Liberal Arts” argue that video literacy is one critical skillset for our era.

Basic literacy—reading and writing text—is no longer enough. Now, all media is transmitted through the window of a glowing screen. Television and web video have become dominant modes of communication and even print news media rely increasingly on video to show us “truth.” Understanding video is essential to participating in modern society.

The future of publishing may well involve scaling the ability to find, shape, and ship narrative-driven multimedia projects, which sounds a lot more like an emerging business than a dying one. All publishers should take a cue from Godin and ask themselves: What is a book?

Why is it that when we try to solve immediate problems around technology (“we need to fix social media,”  “people can’t find stuff on our website”), inevitably we find they are symptoms of larger systemic challenges? Jonathan Kahn of web firm Together London articulates how the web is changing the fabric of organizations, and how the task of interaction designers is to help organizations manage systemic change.

Robin Silvester, CEO of Port Metro Vancouver, gave the annual address at the Vancouver Board of Trade and wrote an op-ed in the Vancouver Sun on the subject of long range planning and the implications of four future scenarios for the Greater Vancouver Gateway region.

The scenarios were part of a Port Metro Vancouver initiative called Port 2050 which I worked on earlier this year with strategy firm Adaptive Edge and the PMV leadership team. We engaged hundreds of stakeholders and PMV employees to co-create four different visions of how the Vancouver region’s future might unfold over the next three decades.

It is fantastic to see the scenarios in print, and to see how the Port has already used them as a tool to interpret recent events and to drive further future planning. Kudos to PMV!

Port 2050 participants agreed that we need to develop the policies, programs and mechanisms that allow us to adapt to local, provincial, national and global change. In fact, we had begun contemplating various avenues required over the next few years to allow all of us to do just that — to adapt to future and as-yet uncertain global events.

But then things changed. The Greece crisis. The Italy crisis. Monetary and market upheavals. The Occupy movement, and the questioning its early hours provoked in the public about fundamental and important issues. In a flash, global shocks and economic developments indicating that the changes and volatility we collectively envisaged in the Port 2050 process were real, and closer than we thought.

Robin Silvester, Vancouver Board of Trade Annual Address 2011. A Time To Plan, and a Time to Act. (PDF)

A post on the Innovation Excellence blog asks, “Is business model innovation just another name for strategy?” The author, John Steen, answers in the affirmative in the case of incremental innovation, but argues that radical business model reinvention reaches beyond the conventional strategy toolkit. 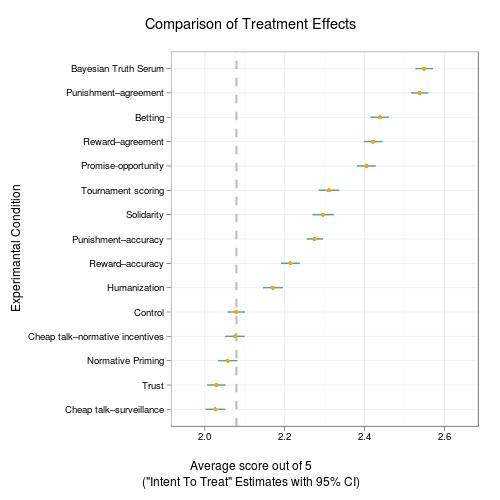 From a recent study looking at the most effective incentives for increasing answer quality from crowdsourced Mechanical Turk workers: both of the top two incentives relied on getting workers to think about what others’ answers would be:

Punishment Agreement (financial)
“After this HIT has been completed, we will review the answers for at least one of the following five questions. For each of the questions we review, we will penalize you if you disagree with the majority of other workers who complete this HIT. The penalty will be a deduction of 10% from the total bonus you could have earned if your answer had agreed with the majority.”

Bayesian Truth Serum or BTS (financial)
“For the following five questions, we will also ask you to predict the re- sponses of other workers who complete this task. There is no incentive to misreport what you truly believe to be your answers as well as others’ answers. You will have a higher probability of winning a lottery (bonus payment) if you submit answers that are more surprisingly common than collectively predicted.”

I facilitated a session at the Wiring the Social Economy unconference in Vancouver yesterday about connecting social innovators around the Cascadia bioregion. Specifically, the discussion focused on how best to connect folks working on similar issues in Vancouver, Seattle, and Portland. Lots of great folks showed up and offered their thoughts — thanks to everyone who participated!
Here are my raw notes from the session. Notes from other sessions can be found on the conference wiki.
Connecting Social Innovators in Vancouver, Seattle, and Portland
Wiring the Social Economy
Vancouver, BC
December 4, 2010

Session premise:
Vancouver, Seattle, and Portland are culturally very similar, and are filled with people tackling similar problems. The border shouldn’t be such a hindrance to communication and sharing, but it is. How can we connect social innovators across these three cities so that we can learn what’s working in each city, share best practices, and inspire each other?
Raw session notes:

Focusing on fixing small things, and not looking at the whole system, is a chronic issue among humans. Engineers and designers just happen to be the ones who make decisions that determine the energy used in your house, your transportation, or the materials in your electronics. Our partners at the Rocky Mountain Institute have been talking about whole systems for years. As Amory Lovins put it, “Optimizing components in isolation tends to pessimize the whole system—and hence the bottom line. You can actually make a system less efficient while making each of its parts more efficient, simply by not properly linking up those components. If they’re not designed to work with one another, they’ll tend to work against one another.”

To me, collaboration must reflect three critical elements:

Number 1: Collaborative strategy development. This is the building block, the creation of a common vision, the foundation upon which we build commitment, trust and accountability. The time of thinking and acting individually has long since passed.

Number 2: Joint investment. Collaborative financial commitment to the joint strategy is the means by which we execute our strategic vision, and investing jointly solidifies mutual commitment and leverages each individual investment many times over.

And, Number 3: Collaboration in operational measurement and improvement. When we define and refine mutual benchmarks and expectations, together we fulfil our commitment to reciprocal accountability and we maximise the operational and thus commercial and economic benefits of the investments that every partner has contributed.

Having advanced these three critical elements of collaboration, we can then offer an option for customers, a truly integrated reality, and not just promotional repackaging.

I propose to you that the new and powerful value proposition for the Vancouver Gateway is this: By collaborating and completely aligning — even integrating — our business objectives and outcomes, we can leverage our individual investments, better mitigate risks, more dependably deliver the reliability and consistency that our customers demand, and deliver the socio-economic and environmental benefits that our communities deserve. We can accomplish these many goals while also generating the largest economic return for every dollar invested in any Canadian Gateway. These are the realities, and the real strengths of the Vancouver Gateway.

This is an excerpt from a Nov 23, 2010 speech to the Vancouver Board of Trade by Robin Silvester, President and CEO of Port Metro Vancouver.

Good to see a focus on bringing additional voices to the table to shape strategy, but here’s hoping this “collaboration” reaches beyond just government and industry to include citizen and First Nations perspectives.

With the massive supremacy of Facebook in the social networking space, it’s easy to assume that the door is closed for social network innovation. The reality, however, is that we’ve barely begun to scratch the surface of how we interact with and derive value and pleasure from our networks. There is good reason to think that even the way we think about who is in our social networks is going to undergo massive change, driven in part by our new access to strangers with common interests.